Cyclone denotes to any revolving storm that move in a circle around a low pressure center. The low pressure center is also mentioned to as the 'eye' of the storm, which is well known for being spookily calm differentiate with the areas under the revolving 'arms' of the storm. That the eye is watching what's going on down below, so it needs a clear alleyway, but the arms are where all the act occurs because this is where the storm is flinging out all of its rain and wind.

Tropical cyclones are what most people are acquainted with because these are cyclones that befall over tropical ocean regions. 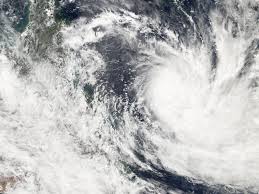 A mesocyclone is when part of a storm cloud starts to spin, which may ultimately lead to a tornado. 'Meso' means 'middle' so you can think of this as the mid-point between one type of thunderstorm and the other. Whirlwinds all come from storm clouds, but not all storm clouds make whirlwinds.

Cyclones in the Arabian Sea form mostly from May till June and then from September till October, monsoon season plays a vigorous role for the creation of cyclone in this basin. Tropical tempests that hit Pakistan are commonly remnants by the time reach Pakistan or make landfall in south eastern Sindh which is not very much populated they infrequently move towards the Baluchistan seaside.

Another target of terrorists