Bangladesh, the Country of Bengal, is officially known as the People’s Republic of Bangladesh. The riverine country borders India and is located near Myanmar amid the Jamuna river and the Padme delta. Bangladesh has rich geography, which consists of fertile plains and a population that is mostly farmers. The celebration of Bangladesh’s fertility is undeniable even in its flag. Introduced officially in 1978, Bangladesh’s flag looks like a dark green field upon which a red circle is seen, creating a bold contrast. This circle is placed a bit off-center so that it seems centered when the flag is flying.

Although the green color symbolizes the rich green countryside of Bangladesh, it also represents Islam that further symbolizes heaven. The reason for it is, almost 200 million population of Bangladesh is Muslim (3rd largest Muslim residing country after Pakistan and India). So green is a gesture of Bangladeshis celebrating their country and its people. However, the red circle stands in the meaning of the rising sun and the bloodshed in the 1971 war of Bangladesh’s independence.

The first or original version of Bangladesh‘s flag was introduced during the Bangladesh liberation war when the country was fighting for independence against Pakistan. Appearing when the war was going on, the flag was slightly different from the current design. It had a greenfield over which a red disk was placed like the current design. However, there was an additional yellow outline of the country’s map placed right at the center of the red circle. Its physical copy was created by some activists and students at a local university in 1970. 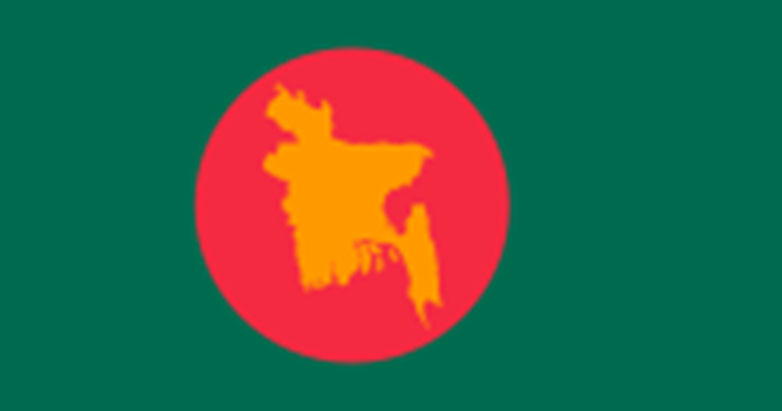 The first version seemed not suitable for the nation's routine use. Bangladesh’s government removed the country's map outline in 1972 because it was difficult to achieve on both sides of the flag accurately. It provided specifications upon which the flag was designed again.

The flag’s design has never changed till now since it was first changed in 1972. 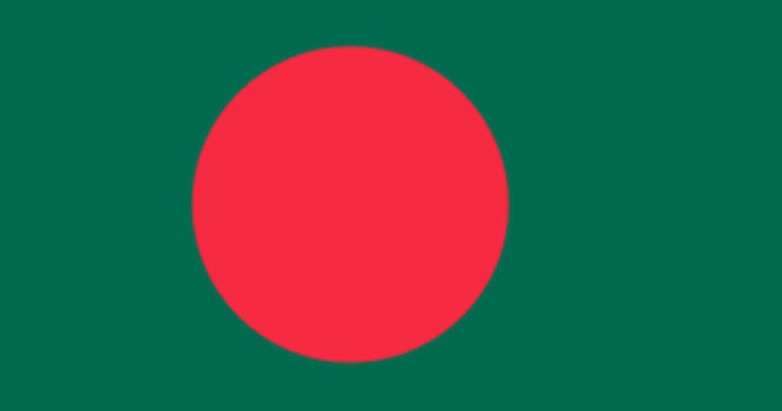 First Display Of The Bangladesh Flag:

The flag of Bangladesh was raised on 3 March 1971 for the first time at the University of Dhaka. As the leader of the Awami League was speaking in favor of independence, the flag was displayed behind him.

Then it appeared at the United Nations for the first time in September 1974.

The Bangladesh flag features two colors - Green and Red. It mainly has a green field with a red circle inside in the middle of the flag. The colors of Bangladesh flag in HEX, RGB, and CMYK are as follow

Symbolism of the Flag of Bangladesh

Made in two colors Red and Green, the Bangladesh flag has a rich and competitive history. The green in the original design of Bangladesh represents the rich green fields of the country as it was designed by a secular nationalist. However, the majority of the population in Bangladesh is Muslim, so the green color of the flag is also a representation of Islam.

Bangladesh was considered a part of India (East Bengal) before the 1947 partition. After partition, it went to East Pakistan under British rule. But this is not what Begakis want; they want their own identity liberated from India or Pakistan that led to a civil war.

Bangladesh achieved victory against the West Pakistani army. This ended the liberation war of Bangladesh on 16 December 1971, and the country celebrates this day annually as a Victory day. So

Who designed the national flag of Bangladesh?

The first flag of Bangladesh was designed by Serajul Alam that had a red disk in the center along with the East Pakistan map.

What does the National flag of Bangladesh represent?

The red disk in the center of the flag represents the bloodshed in the Bangladesh liberation war, where the green color of the flag symbolizes the rich green landscape of the country.

What is the design proportion of the Bangladesh flag?

The design proportion of the Bangladesh flag is 3:5, where the ratio of length to height is 3:2.

What are the colors of the Bangladesh flag?

The national flag of Bangladesh has two colors - Green and Red. It represents the hope and importance of the youth in Bangladesh.

When was the Bangladesh flag first introduced?

The first version of the Bangladesh flag was introduced in 1970.

How many flags does Bangladesh have?

Other than the national flag, Bangladesh has Civil ensigns, Government, Military, Political, Police, and Scouts flags.

What is the name of the Bangladesh flag in Bengali?

When was the map removed from the Bangladesh flag?

The East Pakistan map was removed from the Bangladesh flag in 1972.

Significant people of the country should fly the flag on their official residences. It includes

Other than the regular use, Bangladesh’s flag is displayed on Private and public buildings and office premises throughout Bangladesh on the

16 December is the victory day for Bangladesh as they succeed in achieving independence from Pakistan on this day. Although it cost them millions of lives due to the nine months of guerilla war, it is celebrated annually in Bangladesh. So, on the 42nd Victory day of Bangladesh (16 December 2013), 27,117 people gathered to create a human version of the Bangladesh flag at the National Parade Ground located in Sher-e-Bangal Nagar, Dhaka. They stayed in the form of the Bangladesh flag for six minutes and sixteen seconds. This was the world’s largest human flag at that time and was also recorded in the Guinness Book Of World records. However, India beat this record on 7 December 2014 by gathering 43,830 people to make the largest human flag in an attempt to achieve a new Guinness record. 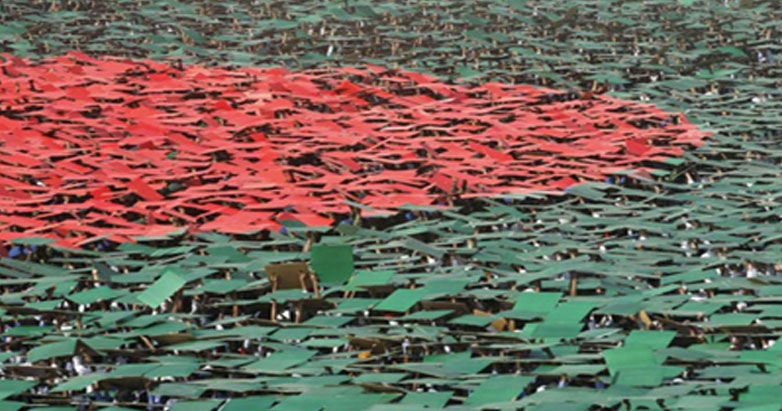 Some government officials are entitled to fly the Bangladesh flag on their vehicles, including

Occasions Of The Half-Mast Display:

Bangladesh flies its flag at half-mast on the

Other Flags Associated with The State Of Bangladesh 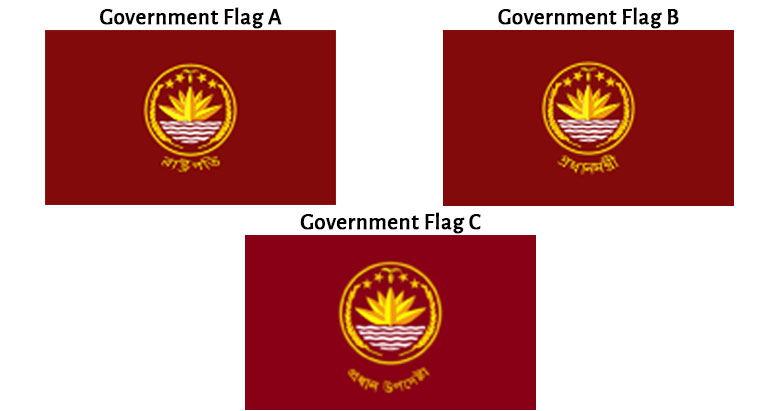 This flag has been in use as a standard for the Prime Minister of Bangladesh since 1972. It shows a seal of the Prime minister on a dark red background. 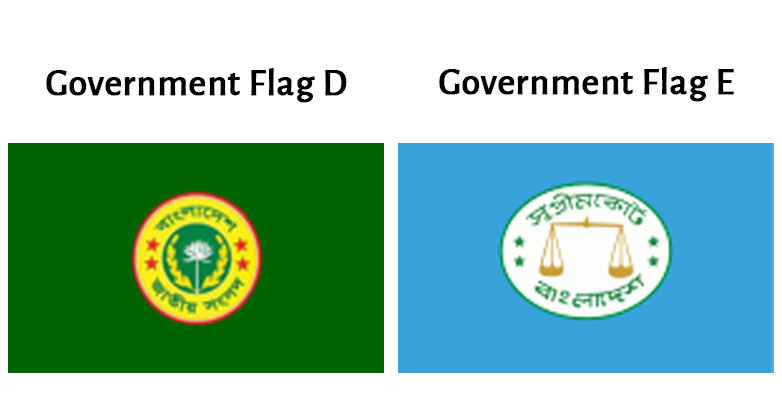 It has been in use as a flag of the parliament since 1972. The seal says parliament, placed on a Bangladesh Green background. 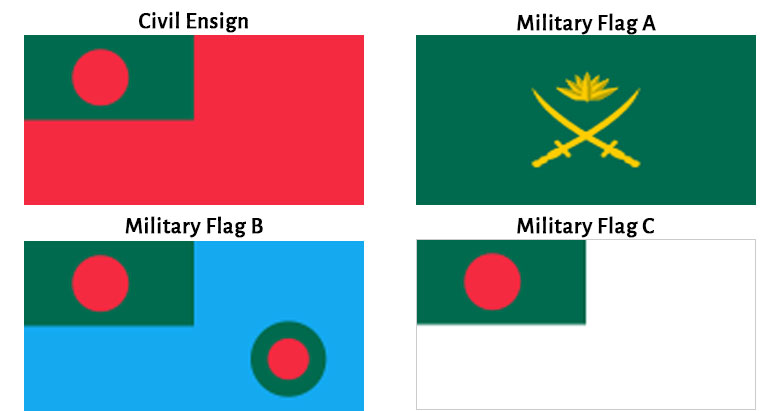 This flag has been in use as the flag of the Bangladesh army since 1972. It appears as the army’s badge placed on the green field.

Since 1972, it has been in use as the flag of the Bangladesh air force. It appears as a sky-blue ensign with the flag of Bangladesh in the canton. An airport roundel can also be seen placed correspondingly.

This is the ensign of the Bangladesh navy that has been in use since 1972. It appears as a white ensign with the flag of Bangladesh placed in the canton 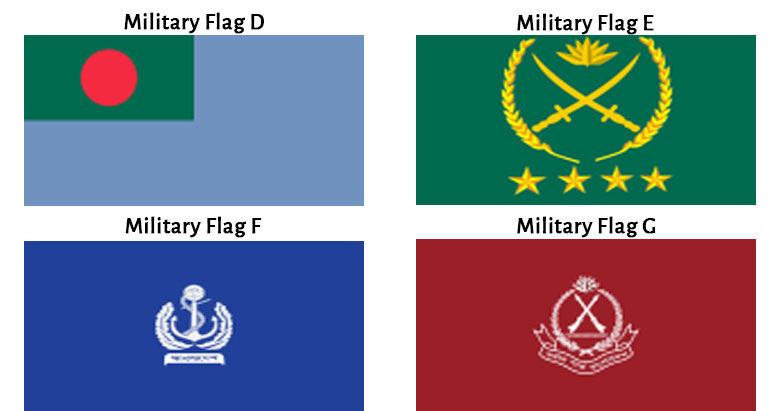 In use as a standard for the chief of army staff since 1972, the flag appears as a greenfield adoring the army’s badge.

This flag has been in use as a standard of the chief of Naval staff since 1972. It appears as a Navy’s base placed on a blue field.

In use as a flag for the border guards Bangladesh since 2010, it appeared as a BGB’s badge placed on a maroon background. 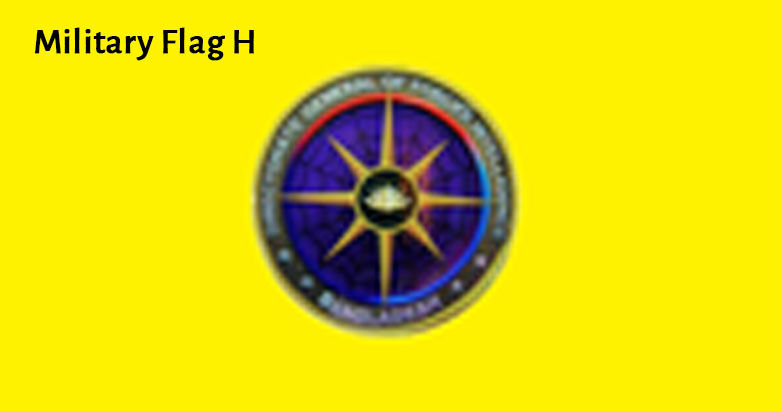 This flag has been in use as a flag of the Directorate General of Forces Intelligence (Armed Forces) since 1977. The DGFI’s badge on a yellow field marks its completion. 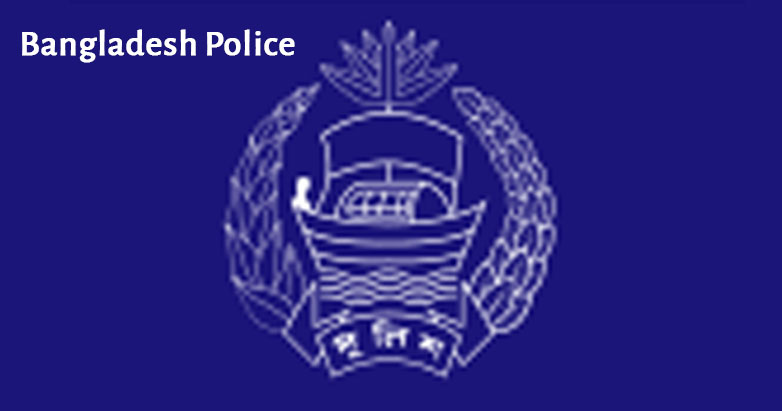 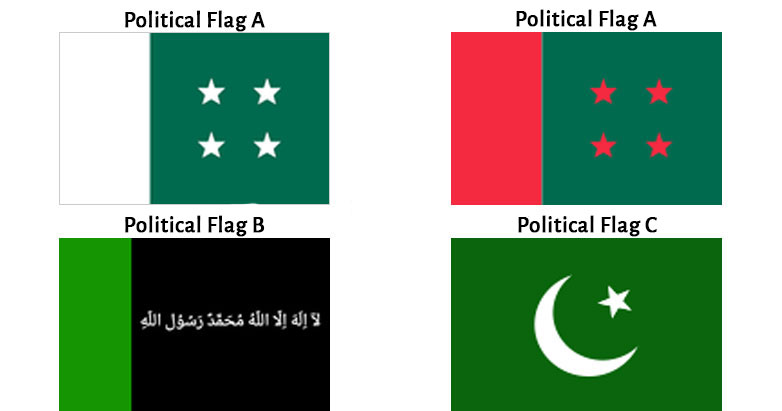 The first flag used to represent Awami League from 1947 to 1971 appears as a greenfield adoring white stars with white ar at the hoist. Then white changed in 1971 to red as Bangladesh got separated from Pakistan.

This flag is in use on Bangladesh's Islamic front. It appeared as a white color Arabic Shahada inscribed on a black field with a green bar at the hoist.

The use of the Bangladesh Muslim League since 1906 is similar to Pakistan’s flag as it appears as a star and crescent placed on a standard green field. 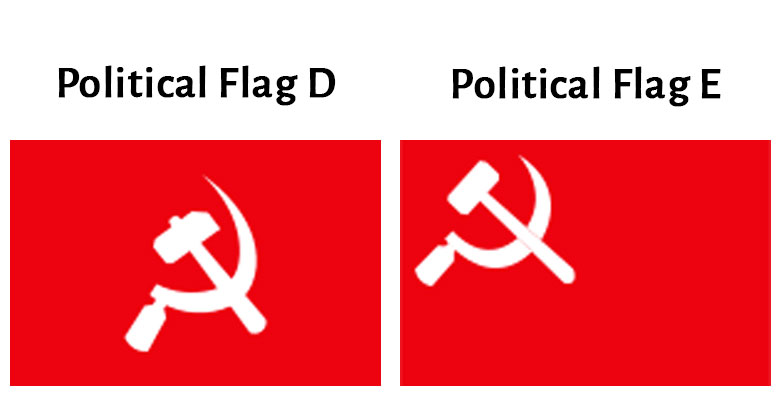 It uses a South Asian communist banner. It appears as a large hammer and sickle of color white placed in the center of the red field.

It is in use by the Bangladesh Communist party, and it shows a hammer and sickle placed at the top left corner of the red standard.