The flag of China, officially the National Flag of the People's Republic of China, is also often recognized as the Five-starred Red Flag. The flag of China is comprised of a red field charged in the canton with five golden stars.

The Chinese flag known as the “Five starred Red Flag” portraying one large star with four small star. The flag has been used as the national flag upon the formation of “The People’s Republic of China” since 1st of October in the 1949.

The Chinese government has had different flags during its various governments and eras. In the nineteenth century, the first national flag of china having a blue dragon with red flaming pearl on its head on a yellow background was adopted by the Qing dynasty known as the “Yellow Dragon Flag”. 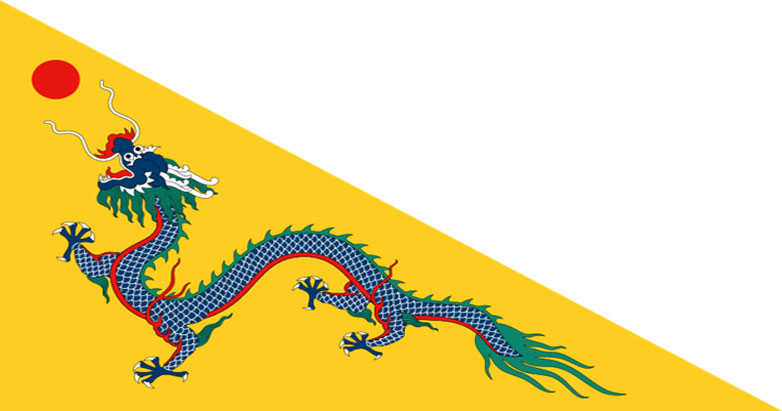 China’s republic flag was Mr.Lu Haodong design being popular matyr of Xinhai Revolution. Lu Haodong presented his final design upon launch of Regenerating China society in 1895. His design was later used as the Coat of Arms of the Repulic of Chian and KMT party flag. The flag “red earth” part was added afterwards during 1906. 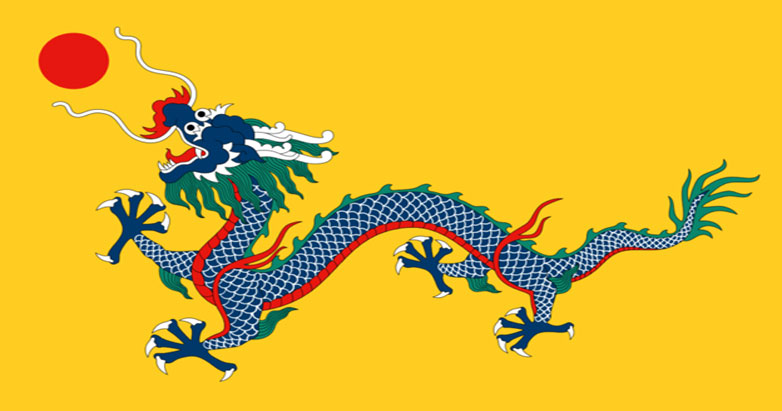 Different flags were used by the revolutionary armies during Wuchang uprising in the year 1911. The “blue sky with white sun flag” was used by Yunnan, Guizhou, Guangdong and Guangxi. 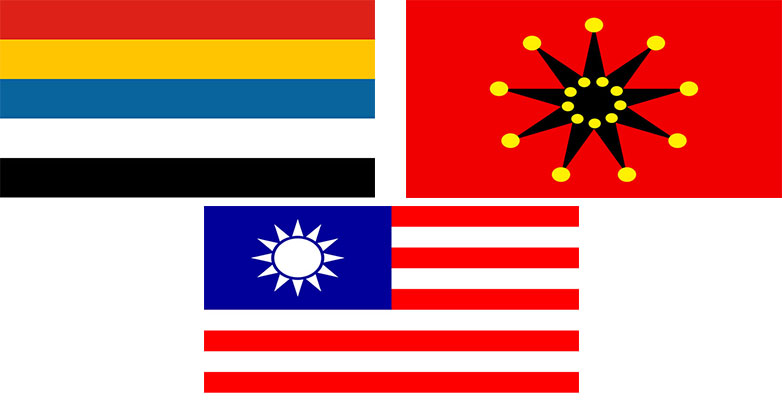 The “Five Colored Flag” was implemented by body of Senate after formation of  the Republic of China government on 1st January in the year 1912 as national flag. The army and navy adopted the “18 star flag”. 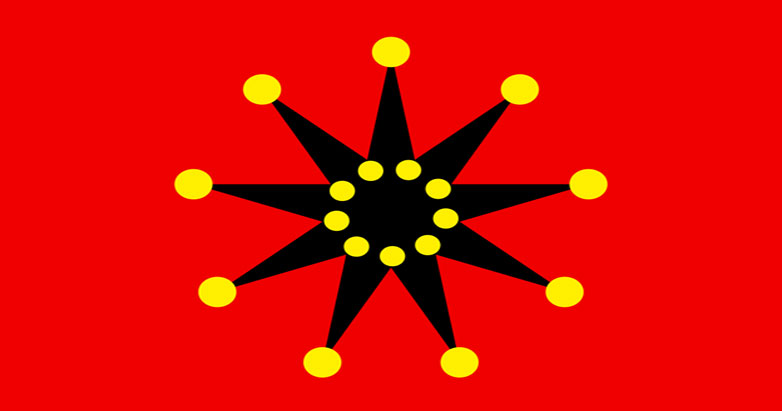 Yuan Shikai dissolved the national assembly in 1913 banning and exiling Sun Yat sen formed KMT. “Five colored flag” was made official nations flag on the 17th of December in the year 1928 as the Beijing government was overthrown.

The Japanese and Wang agreed to use yellow banner outdoors until 1943 afterwards it was abandoned leading two rivals claiming of being legitimate national governments representing China. After China civil war in 1949 year, Chaian kai shek’s ROC government moved its government towards Taiwan as Mao Zedong communist party formed “The People republic of China” adopting their own flag.

The communist party announce a design competition for the national flag and advertised in the local newspaper just a day before People ’s Republic of china was announced. Various designs were submitted to the government as per their requirement as the demanded design need to fulfill certain requirements as to be rectangular, in red color, represent working class power and portray Chinese culture.

Mr. Zeng who won the china flag competition was working in Shanghai and was from Wenzhou, Zhejiang. He came up with the idea of the winning Chinese flag design over several nights sitting in his attic. He referred to CCP as Savior of the nation represented by the big star in the Chinese flag. The idea of five small stars on the flag was inspired by Asian people having four occupation being shang, nong,gong and shi translated as Merchants, Peasents, workers and Scholars. 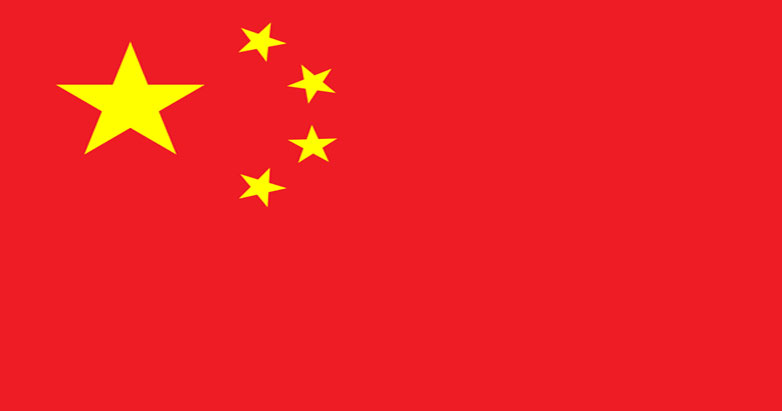 A total of approximately 3000 designs were submitted for the Chinese flag including members from the committee such as Tan kah kee and Guo Moruo. The final design list was shortlisted to 38 designs and were compiled into the shape of book naming as National flag design reference and was then sent to CPPCC for further collaboration. Mr.Zeng’s submitted flag final design was not submitted until Mr.Tian Han suggested forward.

Committee CPPCC representatives discussed regarding the national flags but could not come to common understanding as some members had disagreement regarding the symbolism attached to the Chinese flag regarding bourgeoise class being included while others including Zhang Zhizhong opposed Mr. Mao preferred design having large golden horizontal bar symbolizing the yellow river below the giant golden star on the right as they perceived it as China’s nation being divided. 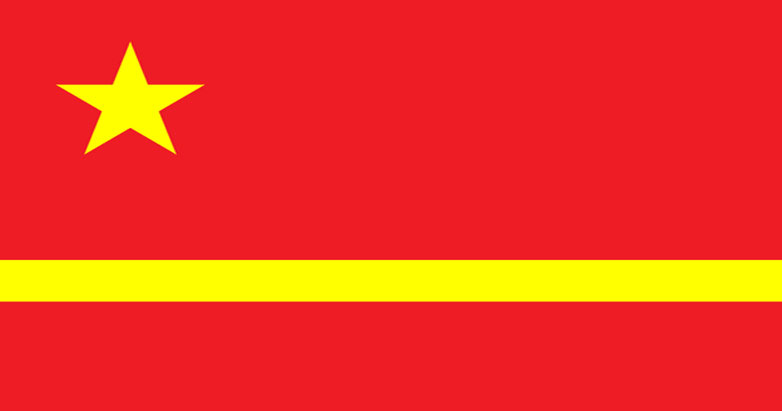 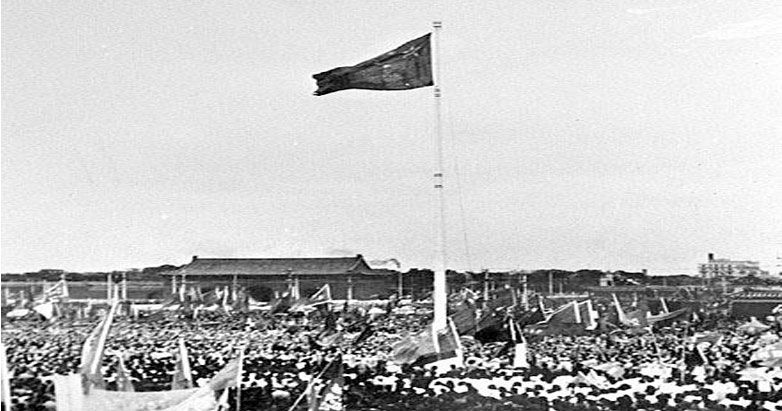 The winning Chinese design by Zeng Liansong was adopted by the Chinese government being named as “Five star Red Flag” on October 1, 1949 hosted in the Tiananmen Square in the city of Beijing; announcing “The People Republic of China” establishment. The final design was inspired by popular proverb “longing for the stars, longing for the moon” as stars being the main attraction of the final design of Chinese flag.

Zeng has difficulty accepting that his design won as it was missing the suggested element of sicke and hammer as “General office of the Central People’s Government” congratulated him.

The flags original design depicted a sickle and hammer in the center of the big star but was removed because of similarities towards flag of Soviet Union. Zeng was rewarded five million RMB for this design by the communist party.

Below are some of the rejected proposal flag designs for “The People Republic of China”. 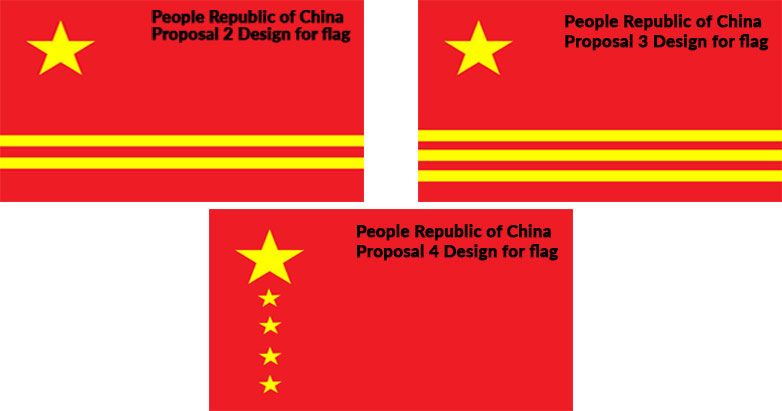 Symbolism of the Flag of China

The society division model is influenced by Confucius teachings

An important class as they were responsible for the production of good for the society benefit.

Working class dedicated to products good from other products

Traders responsible for selling and distributing goods in the society

Chinese flag every element has distinct meaning as the flag’s base red color represented communist revolution and symbolizes the sacrifice of the martyrs blood during the civil war and liberation period of Japanese invasion. The yellow color symbolizes the imperial power as during the Qing dynasty and Manchu dynasty as well as race of Chinese people. The stars in the flag are thought to represent not only social class and unity of people but also earth four elements being fire, water, earth, wood and metal in association with previous emperors.

Chinese’s flag details were noted in the conference of Chinese people political consultative run in the year 1949. Flag major details are as follows

What are the colors of the Chinese flag?

What does the red color represent in the china flag?

The red color represents Chinese culture, china communist revolution, and the sacrifice for the struggle for the liberation of the people.

What does the yellow color represent in the Chinese flag

The yellow color represents the Chinese people as well as a symbol of power for the Chinese imperials like the imperial rule of the Qing dynasty.

How many design of China’s national flag were submitted

Approximately 3000 designs of the China flag were submitted.

When was the final approved Chinese flag first hosted?

The final Chinese flag design was first hosted in Tiananmen Square in Beijing city on the announcement of the Peoples Republic of China.

What was the name given to the final approved china flag proposal design.

How much prize money was given to Zeng Liansong?

Zeng Liansong was rewarded five million RMB for this winning design by the communist party.

Were there any similarities between Socialist republic of Vietnam flag and Flag of China?

Flag of china and socialist republic of Vietnam having different cultural background have some similarities. Five points on the gold star in the Vietnam flag and Chinese flag four small stars represent social classes including the peasantry, working class, bourgeoisie, soldiers and intellects.

Were there any special requirements of the Chinese flag competition?

During the Chinese flag design competition of 1949, participants were required to adhere to some certain requirements listed. First the required flag was to portray the culture and history of the country. Second the flag should represent the power of the working class. Third the flag must be rectangular having length and breath of 3:2 ratio. Fourth the flag must be in red color.

What was the inspiration behind the final Chinese flag design?

Are there any regulations regarding Chinese national flag for institutions?

Is there any specific way China’s national flag is folded?

China’s flag has a specific way of being folded by folding vertically or horizontally.

Is there any event where china flag was associated?

In January 2014, Uyghur Muslims instructed to bow to the Chinese flag being worshiped at Xania mosque in Xinjiang as the three youths burning the flag resulting in raids being carried out among Uyghur homes.

Six flag used by “People’s Liberation army”. Main feature of the flag include the golden star being at the top left corner having two Chinese characters "??" placed towards the right of star on a red background. The special characters “??”pay respect to August 1, year 1927 when PLA was made by the CCP to rebel against Kuomintang government. The flag of the PLA was made on 15th of June in the year 1949 by order from Mr.Mao. Army each brand navy, ground forces, rocket force and air force have their own flags. During the year of 1992, flag of three branches were defined further. Ground force have a bottom forest green bar, stripes of white and blue at bottom for the navy, sky blue bar used by Air force while yellow bar place at bottom used by Rocket force. Earth represented by forest green, seas portrayed by white and blue stripes while missile launch flare portrayed by yellow. 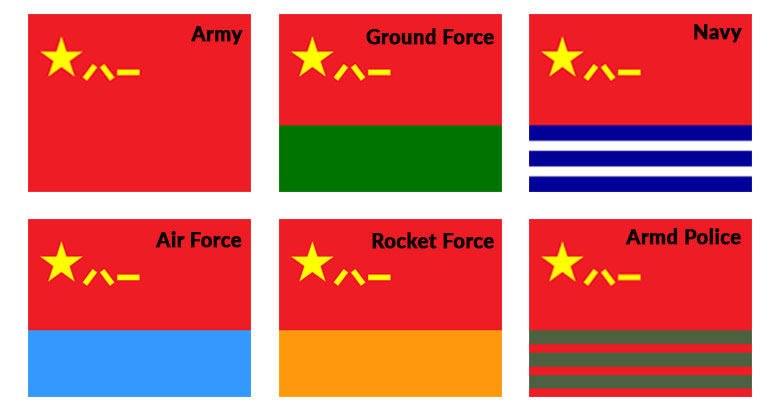 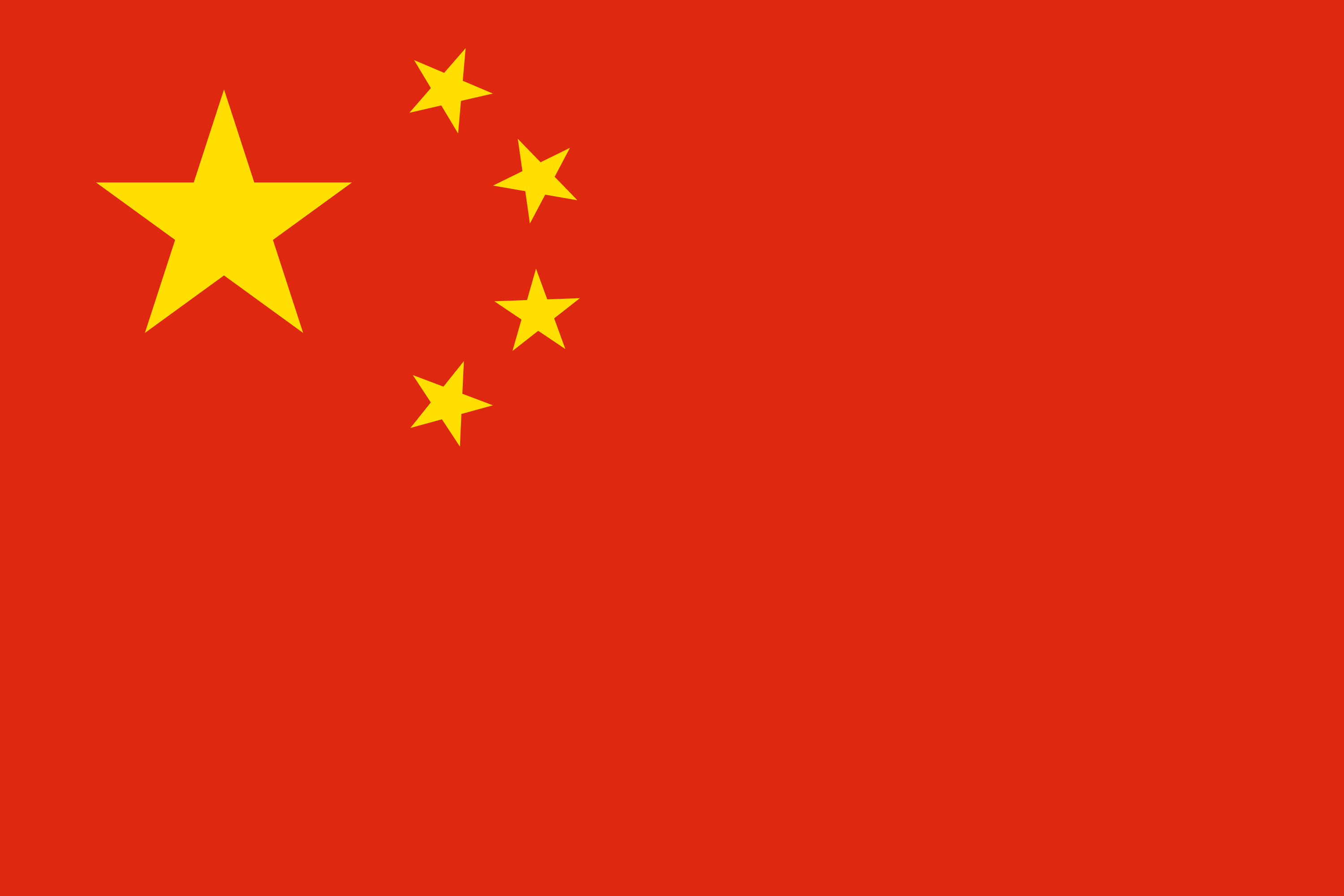 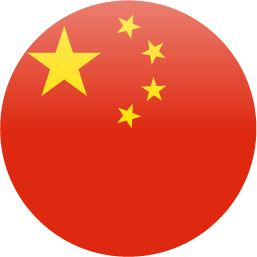