The university has a remarkable and admirable infrastructure. Which was once a dessert of sand dunes is now a state of the art built campus with well-designed faculties, lush green lawns, comfortable hostels and residence, farms and orchids. The multi-university has not only established satellite campuses in Bahawalpur but also in other cities. The new purpose built campus in Bahawalpur is called the Baghdad-ul-Jadeed Campus. The university has shown commendable expansion and development. Not only new campuses and buildings have been constructed, but 47 new departments have been introduced which offer degree programs in more than 70 disciplines. Quality education is being imparted in latest and emerging disciplines such as Business Administration, Engineering, Agriculture, Veterinary Sciences, Computer, Law, Education, Fine Arts, Pharmacy, Life Sciences and Sports Sciences. However further study and research is still being carried out in the pre-existing conventional fields of Religious Affairs, Languages, Social and Basic Sciences.

The Islamia University has established itself in other cities as well to cater to the educational needs of masses. Custom built campuses have been built in the cities of Bahawalnagar and Rahim Yar Kahn. Initially these campuses had only three departments: Departments of Management Sciences and Computer Science & Information Technology. After an overwhelming response to these departments, further six to seven departments were launched to offer degrees in a wide array of disciplines.

The university offers a top-class higher education. The university observes a co-education system. In 2015, the Higher Education Commission awarded the university 8th rank in the general category of universities of Pakistan.

The university envisions to produce graduates who are competent and who have the capabilities to bring prosperous developments in the country. The university has devised strategies and plans to produce career-oriented individuals who will be a significant contribution to the society and the nation. The university is proud of their 20,000+ alumni who are contributing for the betterment of mankind nationally and internationally.

The Islamia University is a vibrant hub which is providing quality higher education in various fields that are relevant to the needs of our developing country. IUB takes pride of its roster of faculty that is highly dedicated, professional and mission oriented. The university has a very competitive and conducive learning environment. Well-equipped and sophisticated laboratories are the distinguishing feature of the University. The affordable fee structure and top class education is a major attraction to the students. Incentives like scholarships and financial help are provided to motivate the needy and deserving candidates.

I pass inter with 70% and doing a fashion designing course from vocational training centre hasilpur . I have also done a computer diploma from millat college hasilpur. 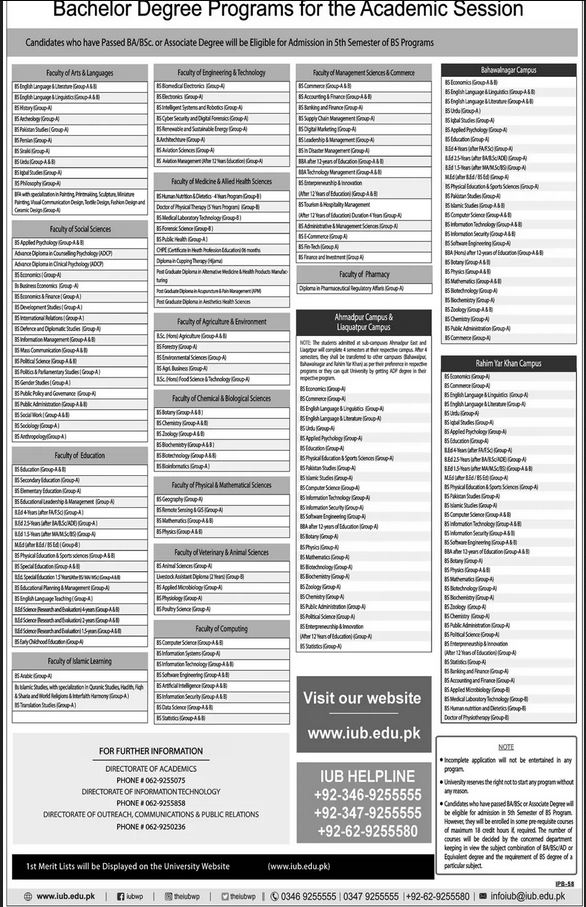