The Iran national flag represent the country religion and sovereignty as it was began being used officially from July 29 in the year 1980 under the ruler ship of Mohammad Reza Pahlavi. The flag has roots that go back to the 18th century during the Islamic period. Iranian national flag is a symbol representing unity among Iraq, Bahrain, Jordan, Saudi Arabia, Djibouti and Egypt along with the fact it is the Iranian revolution reminder towards the people of Iran. 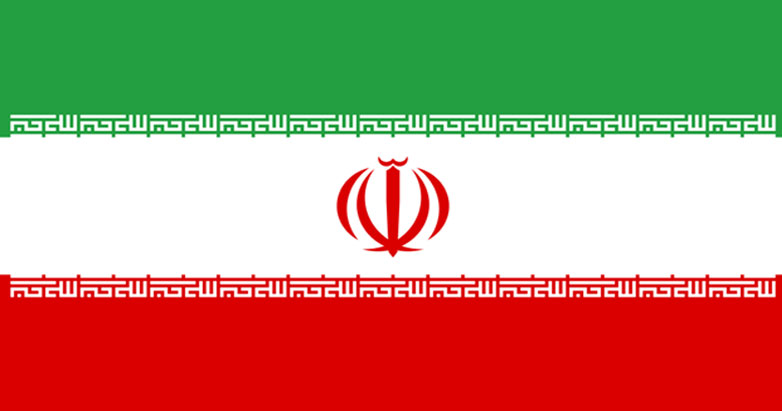 Flag of Iran is also know as “Three colured flag” consisting of green, red and white horizontal bands with Iran’s national emblem written Allah in the color red place on white band and the tabir is mentioned 11 times being in Kufic script inscribed on top and bottom of the red and green band.

Iran has always had history with regard to banner and flags becoming important national symbols during time of war and peace. Cyrus the great had golden eagle with wings on a long shaft as standard.

One of republic of Iran’s oldest flag was found in Shahdad in the province of Kerman representing Bronze age which dates back to 2400 BCE featuring a kneeling woman and seated man facing each other with a star among them. 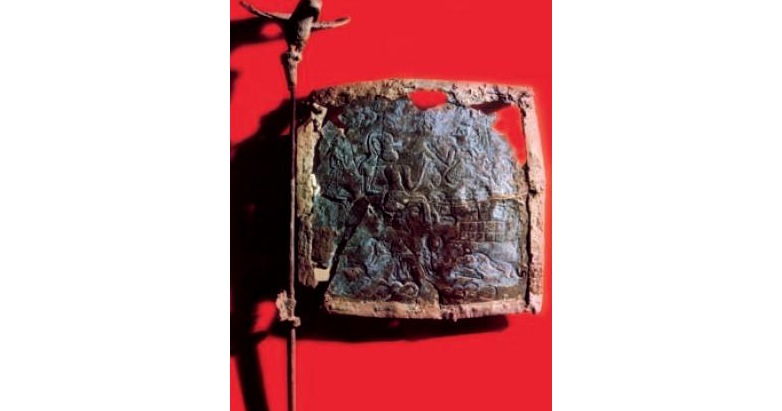 The symbol of sun and lion motif has become one of known symbols of republic of Iran during previous centuries having astrological meaning of having sun presented in Leo sign form whereas both animal and celestial figures having rich and long history for Iran country. The sun and lion motif was joined with scimitar motif and overlaid with tricolor having red, white and green which remained same with slight modifications uptil 1979 Islamic revolution. 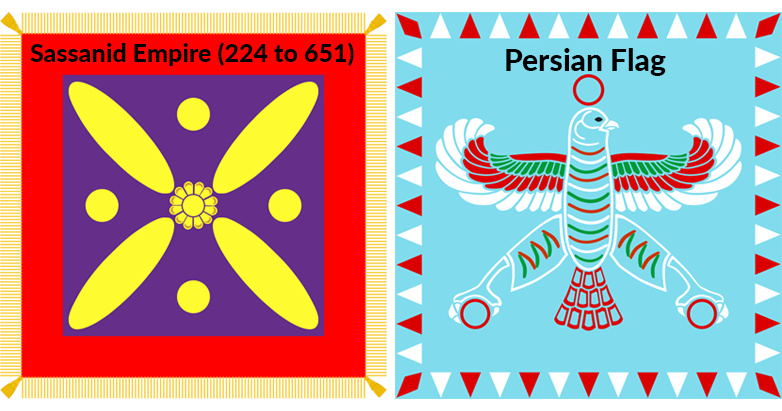 The Persians called banner by the name drafša as Artaxeres II having “golden eagle with outward spread wings place on spear shaft” was in use for Cyrus.

The old Persian army’s had its own customized standard banners that hey used on their tents. Banner being “Douris cup” having square plaque inside saltire represented on Greek vase. Alexander Mosaic of the Pompeii empire also portrayed royal Persian standard through Hellenistic painting dating back to 320 BCE. The plaque was portrayed having purple colour with dark red border having yellow dots. Persian empire of Achamenind empire used the “Persian bird” for most of their flags as these have been believed to portray falcon or eagle representing “royal falcon” of Persian empire meaning “glory”. A mini banner in square shape tile was discovered at the site of Persepolis in the year 1948

Having been made of Egypt’s blue frit known to be portraying Egyptian Horus but the Persians believe it is associated with Achaemenids royal falcon or eagle.

The Persian flag used during Sassanid empire was made rectangular leather having thin silk layer decorated with small jewels along with having four point star at centre portraying world’s four corners. This flag or star was referred as “Kaviani star” in the book Shahnameh referred to as the book of kings. The Persian flag was larger than original “Kaviani star” apron and suspended from lance having tassels of magneta, yellow and scarlet tassels and jewels attached towards its lower edge. This Persian flag was demolished by Arab Muslims after their invasion during the defeat of Sassanids. 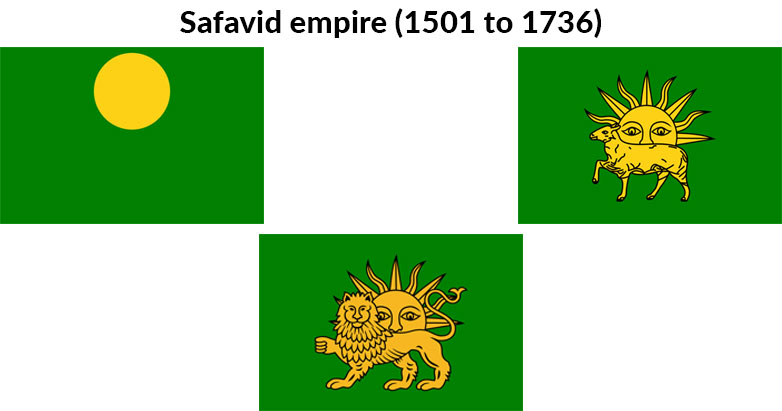 During the year 1524-1576 king Tahmasp I changed the flag’s moon with symbol of sheep and sun. During Islmail II king empire reign, the Persian adopted the lion and sun symbol having gold embroidered. The lion represented state and Sun represented religion. Various other symbols and banners were utilized during the Safavid empire period but when Shah Abbas I king took power the lion and Sun emblem had become the most popular of Iran.

Safavid empire believed the sun and goat symbol related to Shahnameh legends or stories of Islam, prophet or other Islamic origins. The shah or king during Safavid period was considered as holy being and ruler of state. The shah or king served as holy figure and ruler associated with Jamshid being Persian kingdom founder and Ali being first imam. The lion was associated with ali and sun with Jamshid. The symbols may have been from interpretation of Shahnameh or refrence to “Sun of Iran” and “Moon of the Turians”.

The cresent moon became symbol of ottoman sultans being the new rulers or Iran Safavids choose sun and lion symbol to represent national emblem of kingship. The sun was chosen due to time being associated with solar calendar as Leo in Zodiac is linked to leo so the sultans of iran chose this special symbol to represent double meaning having union of earth kind and cosmic imam in union.

The rulers saw the lion symbol as Ali their imam representation and the sun exemplifying glory of religion incorporation the concept of god provided glory providing justification for their reign.

The dynasty of Afsharid have two flags being royal as one with white, yellow, blue and red stripes and another one with blue, red and white stripes. Nader shah used flag having lion and sun symbol in the center along with red border having yellow banner. All the flags used were triangular in their shape. Nader shah avoided the usage of green colour due to its associate with Safavid and Shai Islam. 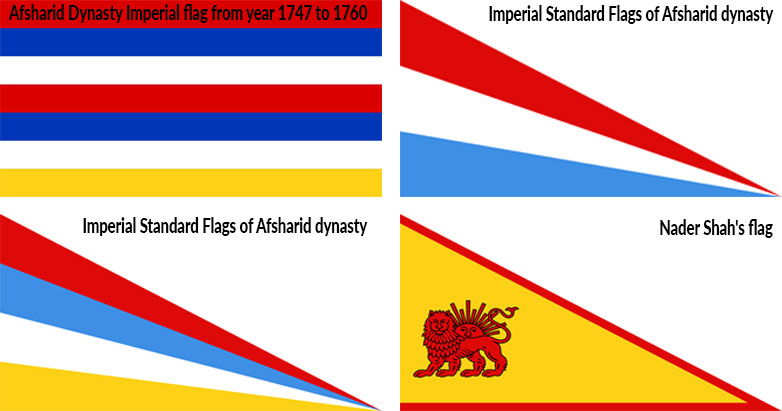 During they Zand dynasty reign the flag used had gold sun and lion in the center along with green border being triangular in shape. Another variation had same design along with combination of red and green colours. 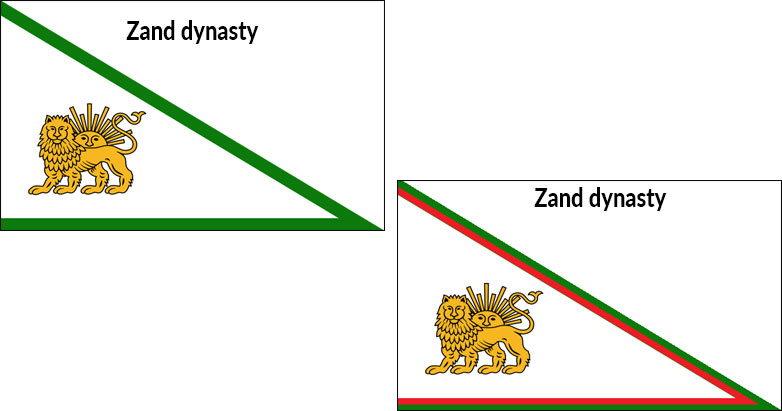 The flag used by Qajar kings were rectangular flag. Mohammad khan Qajar flag incorporated sun inside yellow circle along with lion having gold colour. Flag of Fat′h Ali Shah incorporate lion on red plain field. The main symbol of the flags incorporated lion holding a sword having various versions like white for diplomacy and green for peace. 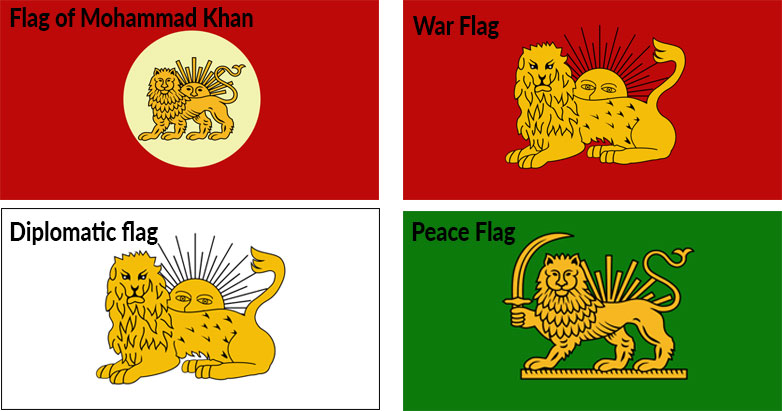 During Mohammad shah dynasty, two different lion symbols were mixed to form single flag incorporating lion with sword with sun in front. During the reign of Naseer al-Din Shah the main flag had lion as symbol in the center with green border applied towards its three sides. Naval flag had a green and red border symbol along with a civil symbol flag being similar but without the sun and lion. 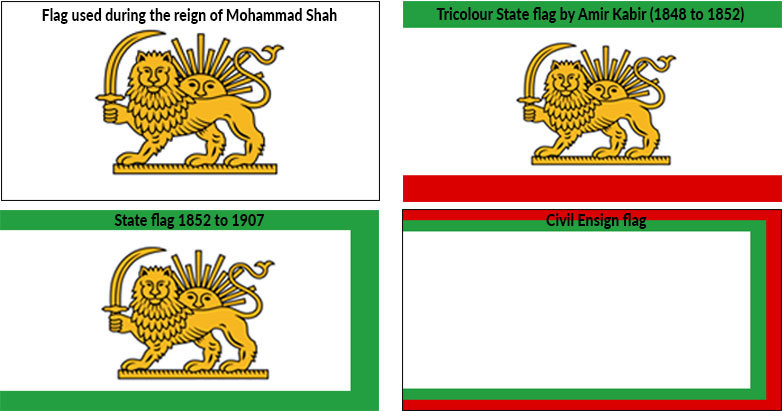 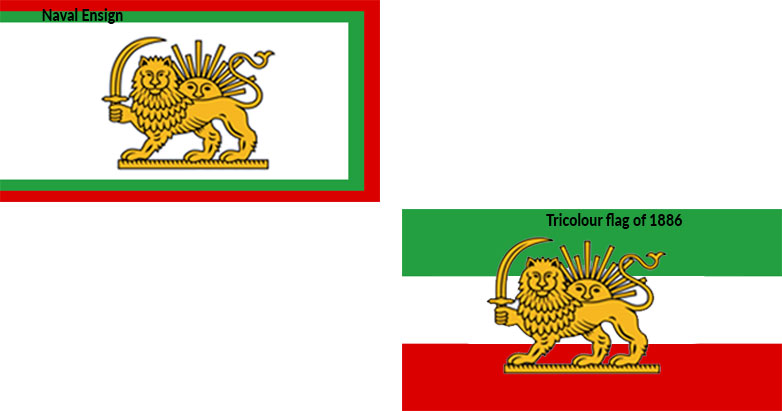 The modern Iran tricolor flag was adopted after the Iran’s constitutional revolution in the year 1906. The fundamental law incorporated on 7th October in the year 1907 showcased flag having sun and lion symbol in the middle having red, white and green colours. The exact details of the symbol describing the position, size of the lion and its tail in italic “S” shape along with the sun and sword were specified in decree in the year 1910. 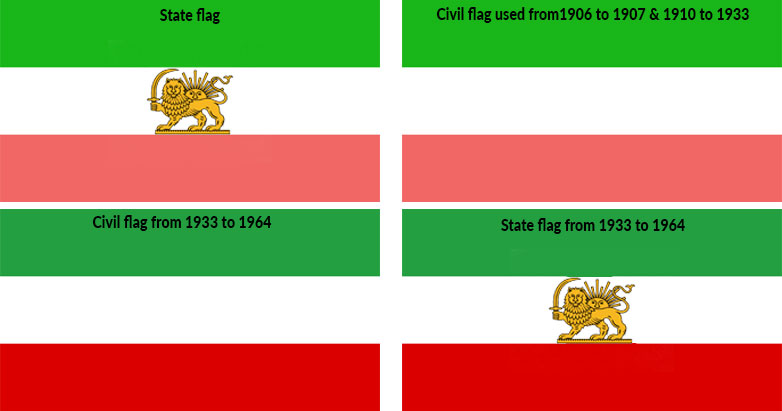 During the time period the colours of the state flag appeared pale as red resembled pink colour. There as three variant of the main flag in use. State flag being tricolor with sun and lion in centre. Civil and national flag were tricolor with no symbol. The war and naval flag were similar to state flag but having emblem surrounded by wreath and having a crown mounting. All the flags had 1:3 ratio.

The flag had gone through two modifications during Pahlavi era. The flag colours were darkened and symbol’s design changed in the year 1933. The flag’s crown on the naval flag was replaced with Pahlavi crown and the sun features were removed. 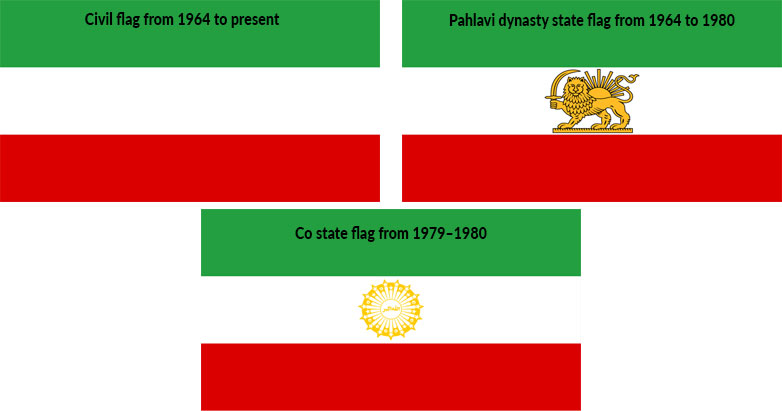 After the revolution the Iran interim government removed crown from the naval flag. The national flags and old state flag remained same until the year 1980 upon the adoption of Iran modern flag.

The new formed Iran government though of the sun and lion as symbols of western monarchy and wanted the symbols to be replaced despite having lion having association with Ali being the first imam concerning Shia sector of Muslims. The lion and sun symbol flag is now used by exiled Iranian people representing opposition towards the Islamic republic. The lion and sun flag is also used by some political groups and mujahedin and also by Iranian refugee communities. The lion and sun flag also showcased sometimes on some Iran souvenirs and flags as it represents old monarchy system present in homeland.

The Islamic republic of Iran has the following colors listed in the national flag of Iran.

Symbolism of the Flag of Iran

After the formation of 1980 Iran constitution , the parliament had changed Iran’s flag design and seal bearing Lion and Sun with the current red symbol representing tawheeed and unity by placing it in the center of the flag. Iran’s national flag was designed by Hamid Nadmimi after approval by leader Ayatollah Khomeini and the parliament on 9th may during the year 1980. The new symbol emphasized oneness of Allah as its was formed from geo symmetric and overlaying parts consisting of Tauheed symbol that “there is no God Except Allah” representing in tulip form having one line and four crescents. The Iran flag central symbol’s or emblem symbolizes value of sacrifice and patriotism as it is believed that red tulips emerge from the blood of martyrs.

Iran’s national flag mentions “Allahu Akbar” translating “God is great” in kufic script shown in stylized form on inner edges of red and green band of the flag symbolizing the call of the beginning of Islamic republic on the even of 11th February in the year 1979 when national radio broadcasted “the voice of the Islamic Republic” marking the beginning of Islamic revolution. 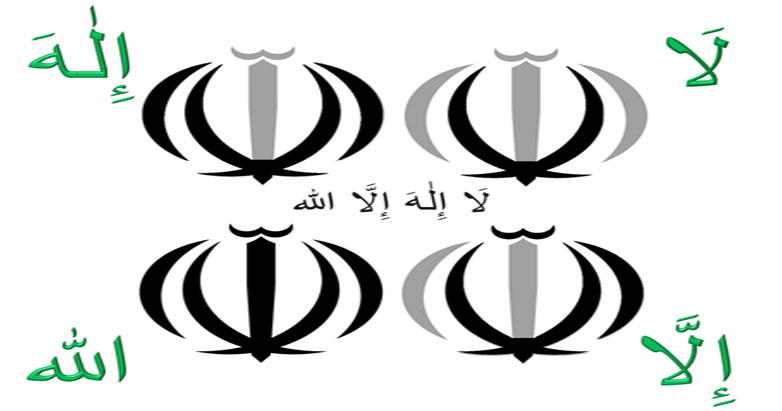 The republic of Iran national flag colors also have hidden meaning as green colour portrays Islam religion, white color represents peace and red stands for courage while the national Iran flag has kufic script on the green and red stripes translating “Allah is Great” which is mentioned 22 times on the flag.

What is the Islamic republic of Iran’s Flag proportion?

The Islamic republic of Iran national flag has a 4:7 proportion.

What did Iran’s historic flag symbols of lion and sun represent?

The lion was interpreted as Shia first Imam as Hazrat Ali and the sun symbol representing Islam religion glory combining to represent unity of earth and cosmos.

Did the sun and lion symbol have any other linkages towards Iran’s history?

The lion and sun symbol have been to have astrological relation to Leo zodiac sign and the animal figures have had rich history in Iran culture.

Where was the oldest Iran flag found?

Irans oldest flag was located in Shahdad in Kerman province dating back to 2400 BCE.

What does the new Iran flag emblem represent?

Iran new flag central symbol represents the Tauheed or Islamic faith ideology “Allah o Akber” translated as “there is no God except Allah” in Kufic script.

What are present Iran flag colours?

Iran flag is made up of three colors red, white, and green.

What do the colors of Iran new flag represent?

Does Iran flag colours have any hiding meaning?

Does Iran flag have any other kufic script mentioned on the flag?

Yes, the Iran flag has a small Kufic script mentioning “Allah is great” along with the red and green stripes of the flag.

How many times is the small kufic script mentioned on the Iran national flag?

The Kufic script is mentioned 22 times on the flag.

What was the new Iran flag officially adopted?

The modern and current Iran flag was adopted on 29 July in the year 1980.

The republic of Iran has used various naval flag in the past as mentioned below. 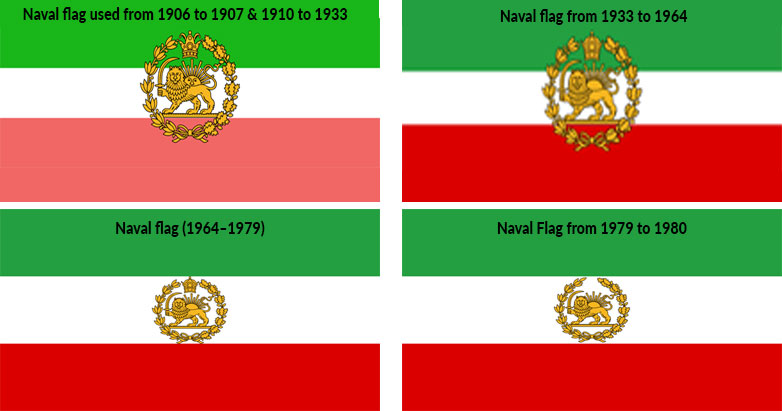