Education is Key to Development. A country cannot develop economically unless her literacy rate is accelerated. This is one of the important factors regarding being less developed in the world. Pakistan is one of the countries in the world, which invest a lot in education sector with vast human resources base with abundance of talents. Efforts had been made and are ongoing to boost up literacy rate to capitalize the human resources through the economic tools of efficiency of labour to make breakthrough in the vicious circle of poverty.

The founder Vice Chancellor Prof. Dr. Syeda Farhana Jahangir was appointed in 10th June, 2005. The Camp Office of the University was Established at the Department of Psychology, University of Peshawar. Funds were available by November 2005. The University became functional in the hostel building of Government Frontier College for Women, Peshawar. In February 2006 that the first academic activities were launched at the university with the opening of eight Departments i.e. Arabic, Psychology, Computer Science, Islmaiyat, Mathematics, Statistics, Economics & English with and initial enrollment of 240 students.

First PC-I of the university worth Rs. 456 million was approved. Land measuring 400 kanals was allotted to the University in 2007 at Charsadda Road by Provincial Government, but was still occupied by the locals. Clearance of site for the construction work was done in mid 2008 after which construction was initiated.

In 2007 Two new academic disciplines were introduced in a rented building in the University Town where 4-years B.S (4-Year) Program was offered i.e. Bio-Informatics & Microbiology. An advanced and research oriented 1 year post Graduate Diploma in Clinical Psychology was for the first time initiated in the Province by the Psychology Department of the University, which has also been declared as the Flagship department along with Women Development Center by the Chancellor in 2007. For the very first time in the Province, a Psychotherapeutic clinic was established by the University to provide Psychotherapeutic services to Women and Children of Khyber Pakhtunkhwa.

In 2008 Women Development Centre and Department of Education were established, which included: B. Ed & PD, Certificate and Diploma in Women Development, Certificate in English Language. Further M. Phil/Ph. D Programs started in the discipline of English, Islamiyat & Psychology. Ten Government Girls’ Colleges were affiliated with the University. M o U was signed with Surrey, Glasgow, Bradford and Hudersfield Universities of UK. HEC-BC Linkage Program was established with University of Leicester, UK.

In 2009 M. Phil was initiated in Mathematics. Three other colleges were affiliated.

In 2012 MS program in Management Sciences, Computer Sciences and M.Phil leading to Ph.D in Economics has been initiated. The Khyber Pakhtunkhwa Universities Act, 2012 , passed by the provincial assembly of Khyber Pakhtunkhwa on 29th May 2012 | Act No.10 of 2012 , the University is named as Shaheed Benazir Bhutto Women University.

Shaheed Benazir Bhutto Women University has been functioning since 2005. The University provides an environment which enables students to develop their academic, moral, physical, professional and spiritual potential. Envisaged initially as a caterer to the education of female population of the Province, the University has earned much more than it had initially conceived.

The primary objective of Shaheed Benazir Bhutto Women University Peshawar is to accomplish the assigned mission of providing quality education to the female students in accordance with the latest syllabi and modern trends so that it can emerge as the leading public sector female university of the country. This enrollment has exponentially risen to 4600 students in 18 different departments by 2012. In addition to this, 16 colleges have become affiliated with the University with more than 5000 registered students. In a short span of three years, i.e. in 2012, 4 academic blocks, 3 hostel buildings, 1 catering block, an administration block, and a multipurpose Hall have been constructed. Seven Departments have been shifted to this since February, 2012 main campus with students accommodated in the hostels.

An Information Technology Centre (ITC) has been established at the Main Campus. The entire network is built on One Gbps at access Layer, providing Gigabit connectivity to end users and on 10 Gbps at Core Layer. Also, Wireless Network is built on latest 802.11 nano Technology. All active IT equipment around the campus is on UPS and Generator-Powered with no down time.

The University has been ranked at 9th position by HEC among 27 nascent Universities nation-wide. It is pertinent to mention that this status was achieved while functioning under unusual circumstances, with major security threats and lack of basic infrastructure required for academic growth.

Departmental programs are aimed at training students so as to become productive and contributing members of their professions and future leaders of the society, human resource industry and the academic world. Our mission is to educate the women masses of this province and their educational requirements in remote and far-flung areas of the province are catered for bringing higher education to their door-step. The student population is drawn from a variety of backgrounds, with students attracted from throughout Khyber Pakhtunkhwa Students from far off areas of the university studying in the university. 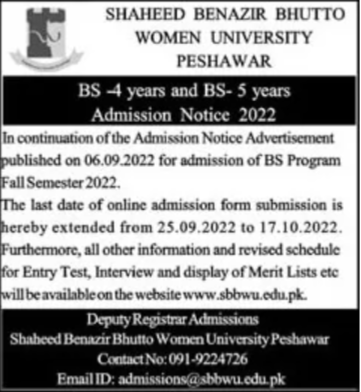