As The University of Sindh with its solitary campus Jamshoro could not keep pace with the growing need of the Sindh Province (Sans Karachi) for higher education, another Campus was setup at Khairpur Mirs, in 1974-75, named after the national poet of Sindh, Shah Abdul Latif Bhitai. The campus was meant to provide higher education Facilities in various modem and scientific fields to the people the northern part of the Province of Sindh, which had rich tradition of producing highly educated and intelligent persons.

In 1986 the Sindh Provincial assembly passed an act convening the Campus into lull-Fledged and Independent University. The Act came into force in 1987, making Shah Abdul Latif University, functional. The present campus of the University covers an area of 291 acres of lush green lawns, play grounds, and trees. It Is located in the Sindh Province of Pakistan, Just three kilometers from Khairpur town. The landscape of the University includes three canals at a walking distance, which serve as excellent picnic spots for the students and the faculty, The University has over 4000 students in various program. There are 3500 undergrad and 1500 Graduate students. About 75 percent of students are male and 25 percent female. Despite five students hostels (including one for girl) University has also provided an arranged transport facility for students, and majority of them commute daily from their homes.

Actually I'm very interested totake admission in mbbs but I found no one to help me butin the internet your web site provide me first hand knowledge about mbbs and about medical colleges also Jinnah medical college seeming good form the text you upoaded,but surely i will try to visit that one college b/c I think my future is there. 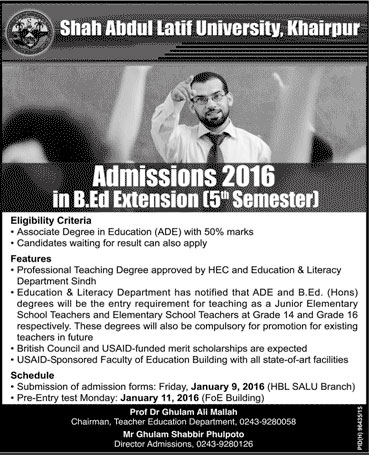