The university has been established in Sardar Bahadur Khan Sanatorium very generously donated by the Pakistan Railways without any compensation. The premises of the university is spread over 40 acres. Keys of the building were handed over to the Vice Chancellor on 18 March 2004 , the building was witness to a historic transformation where it was given the status of Balochistan 's first , and Pakistan 's Third women 's university. From that day onwards , the Sardar Bahadur Khan Women's University of Balochistan has been striving to provide a haven to the women of Balochistan and Pakistan who are interested in educational and intellectual pursuits. The official key handing ceremony was held in the auditorium on the university premises. The D.S Railways, presented the key to the university to the honorable chancellor, vice chancellor ,Dr Shahida Jaffrey in a lavish ceremony consisting of prominent members of Quetta society, minister, local government officers, and Vice chancellor from other universities in Balochistan.

Masters level classes began in a record period of 59 days with an initial enrolment of 103 students in 9 disciplines. Currently, young women coming from all over Balochistan are studying in 13 disciplines working for their masters and bachelors degrees. Quality education in English is being imparted following the semester system. Fourth session at the university is in progress. First batch of 80 students has graduated in July 2006. The university has a total enrolment of over 1000 students and it is increasing in every new session. 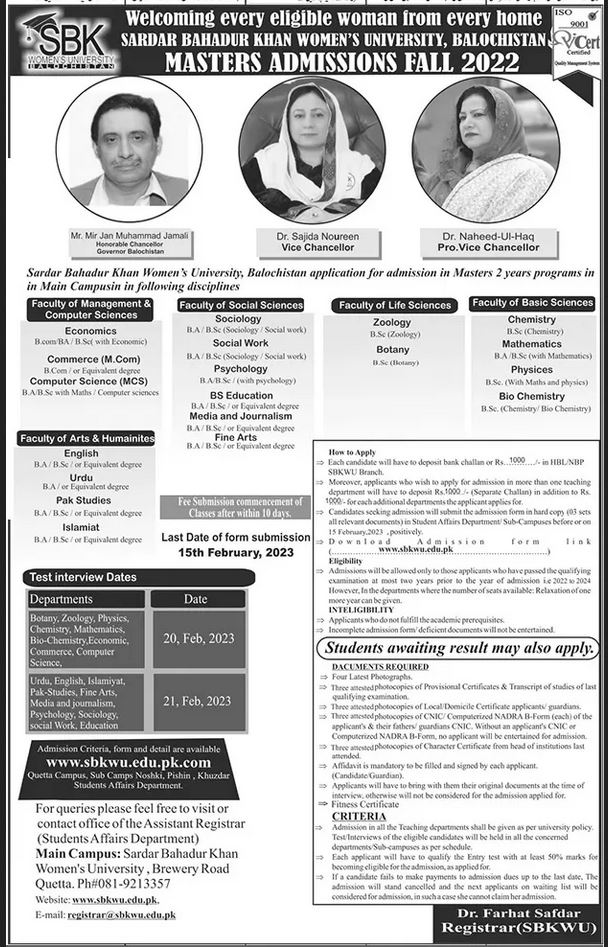