The Kohat University of Science & Technology (KUST) was established as a private sector university in order to cater to the higher educational needs of the Kohat and its neighboring district. The foundations of the highly reputed and prestigious university were laid down by the, Lt. Gen. Syed Iftikhar Hussain Shah in the year 2001. The KUST University was granted the status of a full-fledge, autonomous degree awarding institute via NWFP ordinance No. XXIII of 2001 and the subsequent notification No. Legis: 1 (12) 2001/4451-56, of August 30, 2001.

The location of the KUST University is very ideal. It is situated in the heart of the beautiful city of Kohat which is only an hour’s drive from Peshawar (the capital of KPK).The KUST is situated at Bannu Road near the Jarma Bridge. It is easily approachable not only by the residents of Kohat, but also Peshawar and Islamabad.

The premium education being departed at the Kohat University is aiding for the socio-economic development of Pakistan. The roster of highly qualified and expert Faculty members are engaged in delivering top quality education not only as their duty but as their commitment.

The university is placed at the 22nd rank in the General category of HEC ranking.

The Kohat University is accredited and approved by the major accrediting bodies of Pakistan to conduct examinations, award degrees and run a wide array of academic degree programs. The University is also authorized to make affiliations and collaborations with other educational and research bodies. Hence there is a list of eminent and highly reputed institutes and colleges that area affiliated with the Kohat University of Science and Technology. The educational institution carries out educational and research programs not only in Science and technology but also in other diverse range of fields.

The university was set up with only four major institutes/departments namely: Institute of Information Technology, Institute of Management Sciences, Institute of Education and Research and Department of Microbiology. Up to 2004, the four institutes only offered a 4 year BSC. Degree Program and a 2 year Masters level Degree Program. However the university expanded and grew itself to offer a wider range of educational programs and to cater a larger number of Students. The departments of Physics, Chemistry, Zoology and Microbiology were established to offer BS (Hons), M.Sc., M.Phil. And Ph.D. degree Programs. The university which started with only a few students in its first batch currently enrolls a total number of 6000 students.4000 students are enrolled in the undergraduate program, about 1000 in the post-graduate program and around 60 in the doctoral level programs. 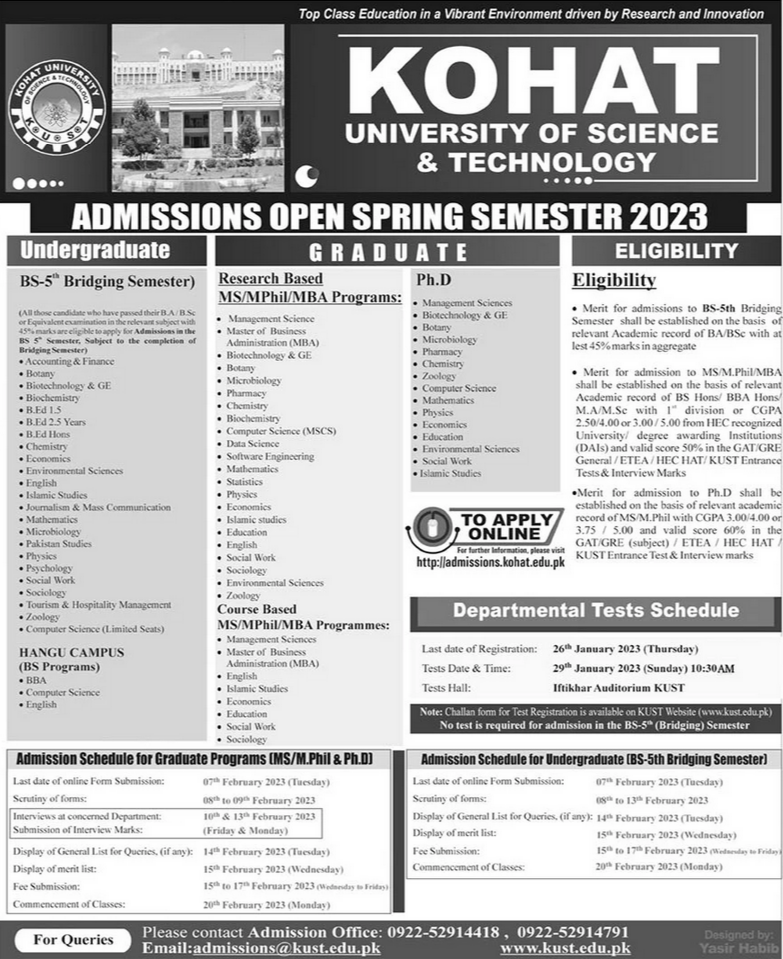