11th November 1980, marks the day when the foundations of the first and foremost Islamic University were laid. The University was named “International Islamic University”. It was established as a Public research institution with the aim of providing illustrious tertiary education.

The university is authorized to award undergraduate, post-graduate, and doctoral studies programs in natural science, social science, technology, engineering, arts, humanities, religious studies. The degrees offered by the IIU are recognized and approved by the Higher Education Commission and Pakistan Engineering Council.

The old campus of the University is situated in the vicinity of the magnificent Faisal Masjid. While the new campus, central library, administrative buildings are located in the sector H3. The university does not offer co-education system. Therefore there are separate campuses for the male and female students.

The highly reputed university has been bestowed with several ranks and honors to appreciate its significant contribution in the field of higher education. In 2012 it was declared to be the Pakistan’s largest University.

The highly-ranked university has substantial student body of 30,000 students in total.

The University came into existence with the unique purpose of producing graduates, scholars and Islamic practitioners who follow Islamic Ideologies. The Islamic University imparts Islamic education along with contemporary education to conform the personality and character of the students to Islamic teachings and values.

The university strives to carry out its mission of delivering quality education and competency based knowledge under the umbrella of Islam. The agendas, objectives and goals of this university are in line of Islamic beliefs and practices. Unlike other Universities, IIU inculcates strong Islamic and moral values into the students. The teaching and mentoring at International Islamic University strengthens the faith of students, making them a better Muslim for themselves and the world. The university makes the students strong in spiritual aspect so that they can not only defend Islamic Ideology but also compete with the challenges of modern world.

The educational beliefs of the university are unique and original. The staff and administration of IIU believes that education should cater the development of man in every aspect. Whether it’s spiritual, moral, intellectual, physical, scientific or linguistic, education should improve and upgrade man in all aspects. In order to achieve complete harmony and satisfaction, an individual must submit himself to the will of Allah. The university emphasizes on the fact that Education and Islam are not two different things. Alhamd believes that the decline of Muslim Ummah can be prevented if our education practices align with Islamic beliefs and ideologies. The University promotes research and education in the light of Quran and Islam.

They even don't have capacity to manage their website or even can make a good website , what they will teach their students :p

Others Level Program at iiu 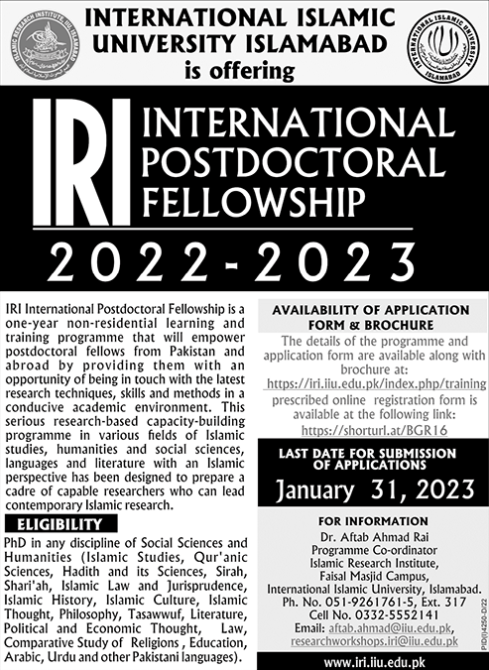