The college was initially founded in August 1957 at Mirpurkhas, Sindh as a residential institution. It was established under the name of "Government Cadet College Mirpurkhas". The college came into being due to the vision and efforts of Mr. A.M. Nizamani, the then Director of Education of Hyderabad Region, and sanctioned by Mr. Muhammad Ayub Khuhro, Defence Minister of Pakistan.

The first batch of teachers joined the college on 5th of August 1957 at Mirpurkhas while the college building was still under preparation. These five teachers were Mr. Abdullah Khadim Hussain, Mr. Feroz Yusuf Khan, Mr. Aziz Ahmed Farooqui, Mr. Hasan Masud Zuberi, and Mr. Syed Zahoorul Hasan. While the government had advertised for the position of Principal of the college, Mr. Mohammed Hasnain was appointed as the In Charge (Acting) Principal on August 25, 1957 for the initial few months. He was soon succeeded by Col.(retd) J.H.H. Coombes on March 20, 1958.

The first batch of 30 students joined the college on 27 August 1957 in class VIII. This was the birth of an institution that has since produced thousands of students, many of whom have achieved a position of eminence in Pakistan and abroad.

In 1958, a new site was sought in order to build a permanent campus for the college. After an extensive search, the site was chosen at Petaro, a few miles up the river from Jamshoro. The construction of a purpose built campus began almost immediately. Mr. Habib-ur-Rehman, Minister of Education, laid the foundation stone of the college on 16th of January 1959. The initial cost of construction of the buildings of the college sanctioned by the government of West Pakistan was Rs. 2,700,000. The college finally moved to its new premises at Petaro in August 1959. At the time of the move, the River Indus was in flood, and Petaro was also submerged under its waters. The building in Mirpurkhas that originally housed Cadet College Petaro was given over to the Government College Mirpurkhas.

The first principal of the college was Col.(retd) J.H.H. Coombes who retired from the college in 1965. He was followed by Cdr.(retd) Firoz Shah, who remained at the helm of affairs at the college until 1972. The previous principal was Cdre. M. Abid Saleem (2000-2007) who has been instrumental in taking the college to even greater heights and maintaining its academic standard. The present principal is Cdre. Muhammad Aslam.

The college is a residential institution for over 900 full-time students at present, providing education from Class 8 to Class 12 (Intermediate). At the time it was first constructed, it was designed to accommodate only 360 students in four houses (or hostels). The capacity was expanded to 570 with the construction of 2 more houses in the late 1960s.

The year 2007 marked the fiftieth anniversary of the college. Gen. Pervez Musharraf, President of Pakistan was the chief guest at the Golden Jubilee celebrations on 28 February 2007. On this occasion, President Musharraf announced the formation of a university in the vicinity of the college that will be sponsored by the Metupak Foundation.

It is an awosome college 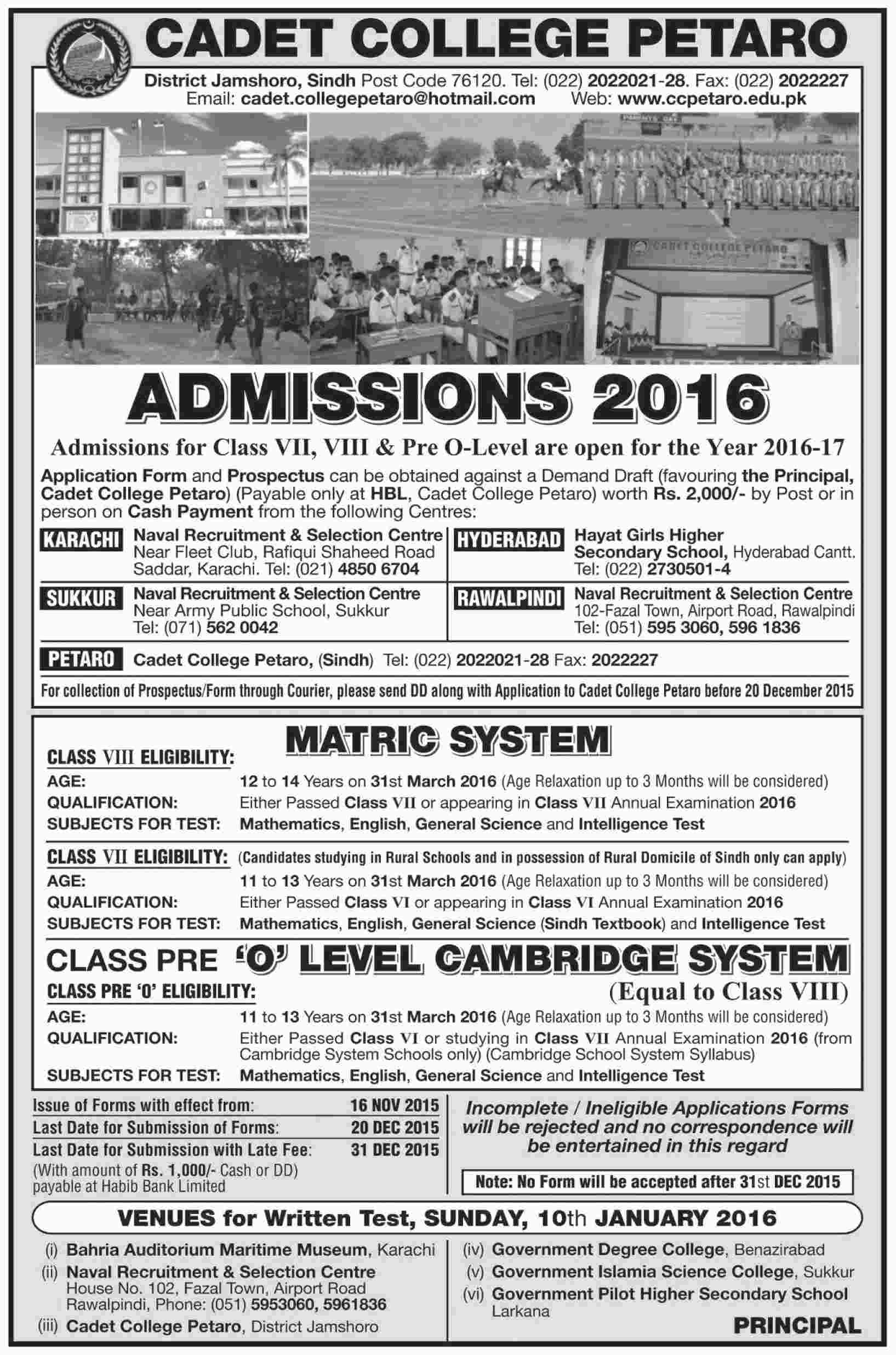