Establishment of universities in the traditional province of Khyber Pakhtoonkwah, is a challenging yet fresh breeze for young local students who want to seek education in their own region .Bacha Khan University is one of the recent example of such institutions .Since 2012, Bacha Khan University has been at the forefront of introducing new approaches to education, challenging orthodox thinking and redefining out-dated concepts to logics that constitutes advanced provision of education.

BACHA KHAN UNIVERSITY, CHARSADDA, a public university situated in Charsadda, Pakistan, was founded on July 03; 2012.The University was named after Abdul Ghaffar Khan (Bacha Khan). He was a Pashtun independence activist who rose against the rule of the British j. His nonviolent opposition and genuine Muslim practices made him a legendry icon among popular Khyber Pakhtoonkwah personalities. He has given the message of peace and universal brotherhood.

Prof. Dr. Fazal-ur-Rahim Marwat was appointed as the first Vice Chancellor of the University. The mission of Late Bacha Khan, to advance knowledge and learning through quality research and education for the whole nation is the actual motto of Bacha Khan University Charsadda. The mission is to progress the university education in the years ahead which would instate Pakistan into the comity of respectable nations of the world.

The Campus is situated 6 km away from Nisata Interchange, Charsadda. Initially, 4 degree awarding departments: Computer Science, Sociology, Management Sciences and Geology were functional with a a total of 449 students. Later, four more departments were established at the Campus after its expansion under the supervision of Vice Chancellor, Prof. Dr. Ihsan Ali.

Far along, Palosa Campus is offering degree program in eight different disciplines including Computer Science, Agriculture Science, Sociology, and Management science, Geology, Mathematics, Biotechnology and Chemistry. The campus at present is catering 1050 student in all eight departments. 70 highly qualified teaching faculties including 19 PhDs is now serving at the University.

The vast 25 acres land comprises the University. Another 97 acres of land has been purchased near Charsadda, Motorway Interchange for future expansion. At present above 1500 students are enrolled in BS, Masters and MS/MPhil degree programs. The University campus entails 3 hostels two for boys and one for girls. More than 20,000 books on diverse subjects are piled up in the Central Library. Now with the co-ordination of Incubation Center, Directorate Of Information technology Khyber Pakhtoonkwah is thinking of setting up an ERP system at the University.

Authorities at Bacha Khan University work with a mission of nurturing creative and critical thinking among the students. This is done to promote their academic growth and to furnish them with moral values and functional skills that reflects their highest quality education in future.

Bacha Khan University Faculties believes in promoting scientific research among their students to take command at various fields of study.

Furthermore, the mission is committed to set-up an effective network of leading national, regional and international institutions so academic and research progress of renowned institutions could be globally shared.

This Public Sector University has a clear vision about gaining international reputation in research and creative thinking by providing education and effective research activities of socioeconomic development of the province as well as the country .The slogan states the motto "March towards knowledge based economy." 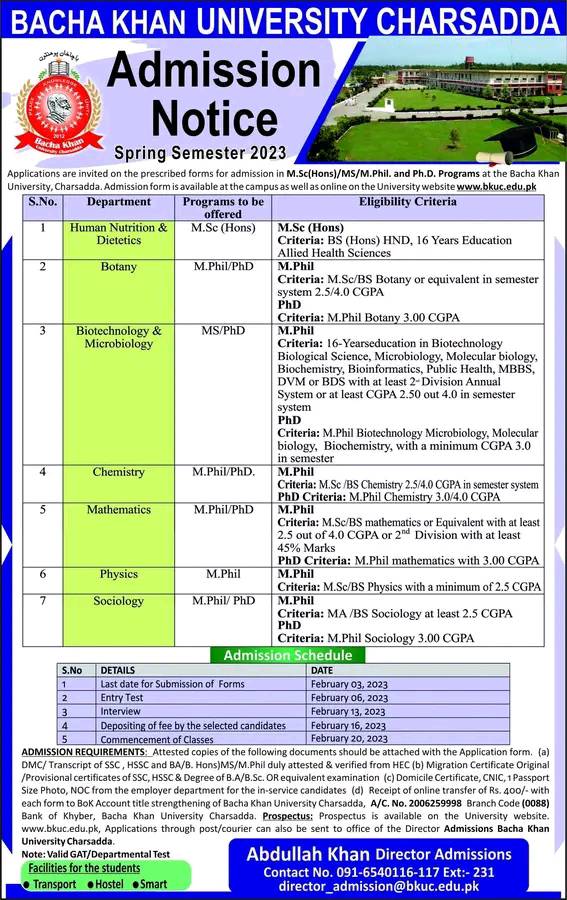